10 Of The Strangest Christmas Traditions Around The World

Every country has its own unique traditions and celebrations. From culturally significant parties and festivals to special traditions for certain holidays, it can be really fun to read about or even experience the unique traditions that make other countries and cultures special. Christmas is a holiday that is celebrated in a lot of the world and a lot of countries have really unique and sometimes even strange traditions attached to it.

From watching a fireplace on TV to eating at KFC, there are some really unusual Christmas traditions around the world. Even if you're not traveling abroad this holiday season, some of these might actually be fun to incorporate into your own Christmas celebration.

To see 10 unusual Christmas traditions from around the world, keep reading!

In the US, we decorate our trees with lights and brightly colored ornaments. Some people pick a color theme and make sure all their ornaments match that theme while other people collect ornaments that have some kind of sentimental value to them, like being from a special trip or tied to a special occasion.

In Ukraine, there's a piece of folklore referred to as the Legend of the Christmas Spider. In this story, a woman and her children were living in poverty in their home when a tree started to grow in their house. On Christmas Eve, the tree became covered in spider webs and when they woke up the next morning, the spider webs had turned to silver and gold. Now, people in Ukraine decorate their trees with spider web ornaments as a reference to the tale and the family's good luck.

Animals are a big part of a lot of the mythology and traditions of many countries. In Iceland, there's a special Christmas tradition that involves a very special cat that roams the streets one time per year.

But this cat isn't the cute, friendly, four-legged friend that we might imagine roaming the streets of Iceland. According to myths and legends, the Yule Cat is a ferocious creature that wanders around during the winter time and eats anyone who hasn't gotten new clothes to wear on Christmas Eve.

In many countries, we have Santa Claus. He takes gifts to kids all over the world on Christmas eve and loves to eat milk and cookies along the way. But in Austria, there's a much more unusual figure associated with Christmas. 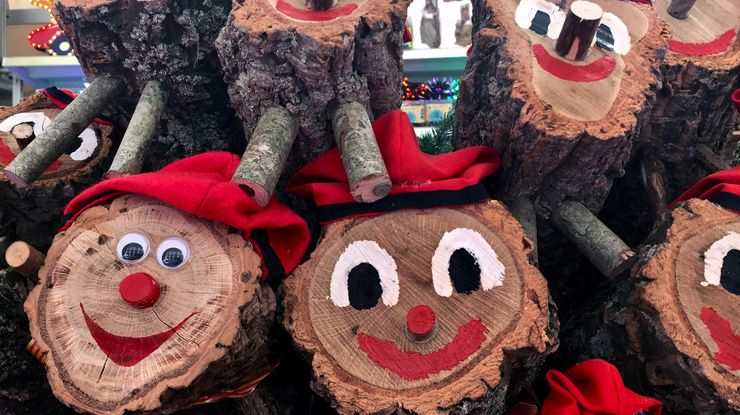 This Christmas tradition is one that is specific to the people of Catalonia, Spain. Tió de Nadal is a hollow log that is found in the homes of many people in this area during the Christmas season. Some families choose to purchase a log that sits up on four legs with a face painted on it, but some families leave their log plain.

On either Christmas Eve or Christmas Day, families then use a stick to hit Tió de Nadal while they sing songs that refer to this as a "poop log" until presents and candy fall out of the hollow center of the log. Some families have the children leave the room and pull out the gifts to set near the log to keep up the illusion that they came from inside Tió de Nadal.

Many families have a tradition of getting together on holidays like Christmas to enjoy a meal together. Whether it's turkey, ham, or a secret family recipe, enjoying dinner together is a huge part of the holidays for many families. This is also true in Japan! Even though Christmas is celebrated a lot differently and has only started to be celebrated in the past few decades, it's still popular for a lot of people.

So, what's the special meal that people eat during Christmas in Japan? KFC! In the 1970s, KFC in Japan started advertising a special campaign during the winter called Kentucky for Christmas. During Christmas, KFC sells a special range of family dinners meant to help people celebrate the holiday together.

It's tradition in Germany to hide a pickle ornament somewhere in the Christmas tree, deep within the branches of the tree. On Christmas Eve, the children all search the tree for the pickle. Whoever spots it first is said to get a special reward from St. Nicholas himself! Today, people keep with this tradition and adorn their tree with a pickle.

There are some foods around the world that are slightly strange to people that don't live there. Some of them are surprisingly delicious once you give them a chance, but then there are others that we could never imagine trying.

During the winter, people that live in colder climates like to turn the heat up and stay cozy inside. If you're lucky enough to live somewhere with a fireplace in your home, the winter is a great time to light it and let the warmth and glow from the fire warm your home. But even if you're not lucky enough to have a fireplace, you can still enjoy the look of one on your TV.

The Yule Log is a TV tradition in the US that started back in the 1960s. It originally aired on Christmas Eve or Christmas Day on New York City's WPIX, but has since expanded and there's even now a version of it on Netflix. The "show" is simply a stream of a fireplace burning with Christmas music playing in the background.

For many countries, the pine tree is the traditional Christmas tree. Whether you have a real or fake one, they sit in our living rooms, get decorated, and have gifts placed under them. But in New Zealand, they have a completely different type of Christmas tree.

In New Zealand, the Pohutukawa tree blooms with bright red flowers during December and January. This is actually summer in that part of the world, but Christmas is celebrated during the same time. This tree has important roots in Maori mythology and its bright red blooms and green leaves are a symbol of Christmas across New Zealand.

In many cultures, Santa Claus is the person that travels around the world and delivers gifts to deserving young boys and girls on Christmas Eve. Kids are told to be good because Santa is watching them and will know if they behave! On Christmas morning, good kids are rewarded with gifts from this iconic figure.

But in Italy, there's someone else delivering gifts. Befana is the name of a witch in Italy who is said to travel around Italy on Epiphany Eve (January 5th) to deliver gifts to children all over the country. If the children were good all year, their socks are filled with candy and gifts. But if they were bad? They get nothing but coal.